800,000 people belonging to this minority today live in Arakan, a mainly Buddhist state situated along the Bangladeshi border in western Myanmar. Marginalised, deprived of nationality, they call themselves Rohingyas and are not generally accepted by the Burmese people, many of whom consider them as illegal immigrants. They have no access to basic services nor do they have the right to leave this state, to work or go to school. No longer welcomed in Bangladesh, where they have fled en masse on several occasions, they are regularly driven back across the border. Many survive in absolute misery.

Last June, the latent tensions between the Muslim and Buddhist communities sparked off severe rioting. This was followed by waves of extreme violence. Two hundred people were killed, almost 75,000 fled from their homes, which were often burnt, to take refuge in make-shift camps. Working from Sittwe, the state capital, we took immediate action in many camps, providing emergency aid to the refugees, regardless of their origins. We supplied latrines, constructed and restored water points and distributed hygiene kits in many of the camps around Sittwe, as well as to one camp of displaced Buddhists in the township.

Dirty ponds are the only source of water

Tens of thousands of victims also fled to far less accessible zones such as the canton of Pauk Taw, a collection of islands where refugees are scattered about in several camps. The situation here is even more deplorable. Twelve thousand people have unsanitary ponds as their only water source. At best, they boil water to drink.

Drinking water boats for refugees
We have had to face many challenges to reach them: obtaining authorizations to visit this remote area and overcoming the logistical constraints of drinking water transport, which we have carried out thanks to a system of waterway shuttles. 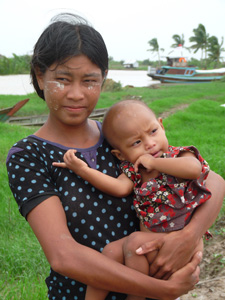 Showing they are not forgotten
The presence of international NGOs such as SOLIDARITÉS INTERNATIONAL is vital, not only to respond to urgent needs, especially those concerning water scarcity (an aggravating factor in the tensions between communities), but also as witnesses to a present-day forgotten tragedy. Our support provides essential added value: we protect both victims and Burmese humanitarian workers. In fact, just being there shows they are not forgotten by everyone and may relieve their mental anguish. RD

Yemen: « Intervening as closely as possible to affected people »

Mozambique: ”We lost everything because of the cyclone”

In the Sahel, children do not have enough to eat