INSECURITY – Informal settlements or unsanitary accommodations … In Lebanon, Syrian refugees continue to live in extremely difficult circumstances. Our humanitarian assistance has to adapt to this emergency, which has endured for almost ten years.

March 2011. Syria falls into civil war, leading to a massive population displacement. In order to flee the conflict, many Syrians would leave the country. “I took the road to Lebanon alone on October 24, 2013. I’ll never forget that day,” says Brahim Aloush, now settled in Maalaqa 034, one of the largest camps in the Beqaa Valley, at the foot of the mountains bordering Syria. “On a normal day, it takes three hours to get to Lebanon from Idlib [Syria]. That day, it took me 22 hours because there were checkpoints everywhere making sure that men were not trying to desert the army by bus.”

Just like Brahim, over 1.5 million Syrians have taken refuge in Lebanon since the crises began. They make up about a quarter of the country’s total population, the highest proportion of refugees in the world. Facing the influx, Lebanon’s infrastructure and resources have become insufficient, all the more so considering they were already struggling to meet the needs of the local population. With social and economic tensions, and sanitation issues, the presence of Syrian refugees has rekindled debates that began when Palestinian refugees were arriving between 1947 and 1967.

For the last two months, with the Lebanese crisis, my husband hasn’t found any work.

In 2019, sixty-nine percent of Syrian refugees still lived beneath the poverty line, and ninety-three percent were living in debt. Social unrest and the banking crisis, which have destabilized Lebanon for several months, have made the situation much worse. “Before, my husband would stand at the side of the road and wait for someone to take him on as a day laborer, in the field or public works, for instance. But for the last two months, with the Lebanese crisis, my husband hasn’t found any work,” says Dalaal, a young 27 year-old Syrian woman who has also settled down in the camp Maalaqa 034. Many Syrian refugees now depend entirely on the humanitarian assistance that is brought to them.

Fearing the Syrian people will stay in Lebanon permanently, the government has refused to create formal settlements or build sustainable infrastructure. After nine years of crisis, time seems to have come to a halt for the refugees. Maalaqa 034 is one of 1000 and some informal settlements numbering Lebanon. Set up on farmlands, it is home to 120 families, where roughly 692 people are distributed among 80 tents. Here and there, two or three keepsakes that were grabbed in a hurry before leaving Syria and household items that were bought after arriving lay about – a washing machine, kitchen utensils and even plastic flowers used for decoration. Syrian refugees try to create a semblance of normal life. Yet their shelters, made out of wood and plastic sheeting, are poorly isolated and they are regularly flooded or destroyed by climate hazards. The refugees also have limited access to basic water and sanitation needs.

During the winter period, temperatures can easily drop below 0ºC, rains are more frequent and alleys are muddy. Every year, the SOLIDARITÉS INTERNATIONAL teams help with the restoration of the camp’s water drainage systems and lay gravel between the alleys. They also provide aid in terms of water access, sanitation and hygiene (constructing latrines, setting up drinking water tanks and sewage systems) and distribute shelter kits all year-round.)

A large number of Syrian refugees have moved to the city to live in apartments that are unfit for habitation or abandoned buildings, where rental costs are still very high. Families crowd together in close quarters with no privacy and no access to drinking water or sanitation. Inès Hussein, a young 25 year-old Syrian woman, is living in one of these collective shelters on the ground floor of a building in Tripoli, the second-largest city in Lebanon. “My children are in good health thanks to all the work done by SOLIDARITÉS INTERNATIONAL,”, she says, “even though there are still issues with waste collection and electricity.”

In order to improve the daily life of residents, SOLIDARITÉS INTERNATIONAL rehabilitated the collective shelter with partitioned spaces making it possible to isolate areas. Our teams also built a drinking water tank, latrines and showers connected to a wastewater network and to city services. Lastly, they set up a safe electrical grid and a management committee. Fifteen families, compared to what was previously seven, can now live in better conditions, including the elderly and people with disabilities.

Syrian refugees are deeply dedicated to improving their living conditions. Many of them have become recognized community representatives and vital intermediaries for humanitarian organizations. “When I arrived in Lebanon, I researched extensively on humanitarian aid and logistics for the camp Maalaqa 034,” says Brahim Aloush. “Today, my role involves coordinating SOLIDARITÉS INTERNATIONAL with its different service providers. With the help of a hotline system, I manage latrine emptying requests, drinking water deliveries and I file health incident reports to get us some help.”

‘’ I file health incendent reports to get us some help”

Community involvement allows SOLIDARITÉS INTERNATIONAL to bring aid on a daily basis and in a way that can closely meet the needs of refugees. When our teams arrive at the camp, word quickly spreads between families and they group together to discuss hygiene conditions and to listen to our recommendations. Certain sessions, such as those on menstrual hygiene, are destined for women. Specific committees have been created for children as well. They take part in playful and educational activities that raise awareness of good hygiene practices. “I’ve memorized the story about the boy who didn’t do a good job washing his hands and got sick. Now, I can tell it to the other kids at the camp”, Iba, a young 10 year-old Syrian girl, proudly says. As the war rages on in their home country, the Syrian refugees have to continue living one day at a time with no knowing of what the future holds for them.

Context and action
A LIFE ON HOLD 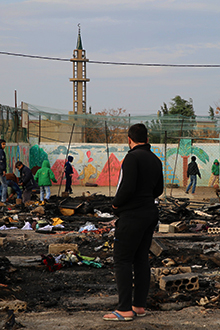 Despite our teams’ shock preparations, emergencies are a regular occurrence in accommodations inhabited by Syrians.

On February 15, 2020, a section of Khriebet Eg Jindi, an informal settlement in the Tripoli region, caught fire during the night due to faulty electrical wiring. By sheer stroke of luck, no one was injured, but thirteen tents that housed sixty-six people were completely destroyed.

SUPPORT OUR ACTION BESIDE THE SYRIAN REFUGEES