From Monday 1st June to Friday the 5th, SOLIDARITÉS INTERNATIONAL’s founder, Alain Boinet, came to Lebanon for a field visit, spending the week with our teams in Beirut and Tripoli (North Lebanon). It was an opportunity for Alain Boinet to meet the field teams and to find out more about the vital aid SOLIDARITÉS INTERNATIONAL has been providing to vulnerable populations affected by the Syrian conflict since 2013. 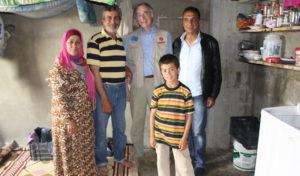 In the course of a three-day visit to Tripoli and the surrounding region (Minieh-Deniyeh and Akkar), SOLIDARITÉS INTERNATIONAL’s teams presented the projects they are working on, and Alain Boinet met and talked to some of the families who benefit from our activities, such as Hamdo, a Syrian refugee who lives in the village of Syr, in the mountains of Minieh-Denieh district. “Hamdo arrived two years ago with his wife, their children, his mother and his sister. He now lives in a small apartment and benefits from SOLIDARITÉS INTERNATIONAL’s cash assistance programme, which helps him and his family get by,” explains Alain Boinet.

“At 5249 feet above sea level, far from everything, I also met 59 Syrian families who have found refuge in an abandoned building counting 41 rooms. They do what they can to survive, and benefit from SOLIDARITÉS INTERNATIONAL’s activities, including the rehabilitation of latrines, showers and water supply systems in improvised shelters.”

SOLIDARITÉS INTERNATIONAL’s teams were pleased and encouraged by this visit, which gave them the opportunity to explain and illustrate the vital work they’ve been carrying out since 2013, and to demonstrate its daily necessity for the Syrian refugees who have settled in Lebanon since the Syrian crisis began in 2011.