At the September 2015 United Nations General Assembly, UN member States formally adopted a goal dedicated to water as one of the 17 priorities for humanity in the 2015 – 2030 agenda. It brought great hope given the lack of consideration granted to the issues of access to water and sanitation until then. But how can such a challenge be faced within 15 years when, despite the progress made, the number of people deprived of drinking water has not decreased so far?

Access to drinking water is acknowledged as a human right. This right is satisfied if water is accessible, available in sufficient quantity, uncontaminated, clear enough and affordable. In addition, access must be organized fairly and without discrimination. These criteria are not met for almost half of mankind . Nearly 2 billion people – i.e. nearly one in four – use a source of drinking water that is fecally contaminated. Many others do not have a regular access to water or have access to a source of water that is either too expensive or non-transparent.

These figures are huge. However, this remarkable progress is not sufficient. Indeed, the world population has increased at the same time by 1.2 billion people. The number of inhabitants of the planet who do not have running water on tap has thus not decreased. It is in rural areas that current needs are the highest, but thanks to the efforts that are being made, access is improving rapidly. Urban needs seem to be less important in terms of quantity but, unfortunately, access to drinking water is deteriorating. Today, the number of urban dwellers without adequate access to drinking water is higher than it was 10 years ago. A strong acceleration of public policy is needed to reverse this disturbing trend. 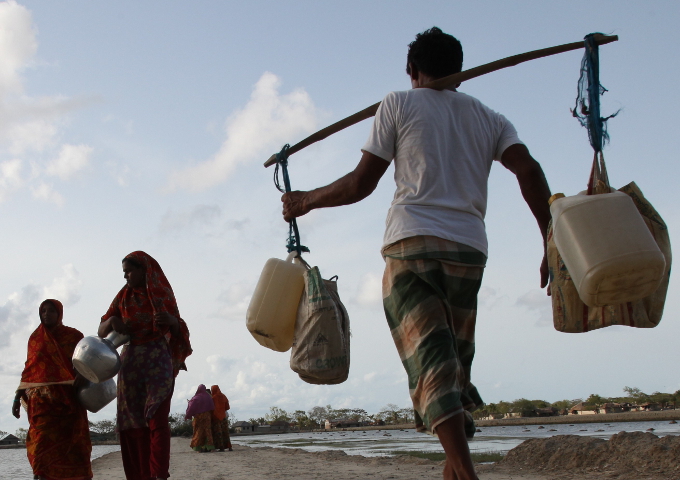 “Thanks to SDGs, water-related issues have stepped into the spotlight”

The global Sustainable Development Goals (SDGs) which have just been adopted unanimously by all Member States of the United Nations bring great hope. Water used to be a subject which was little regarded by the international community but water-related issues have now stepped into the spotlight – they officially became one of the seventeen priorities for mankind.

For access to drinking water, the new global target is far more ambitious than the previous and much better corresponds to the magnitude of the needs. Indeed, the progress indicator to be used combines, for the first time, several criteria for satisfaction of the human right: it aims at “safely-managed water services”– i.e. universal access to a source of water that is uncontaminated, available almost every day and in the immediate vicinity of the home – as early as 2030. Consequently, the new global objective could eventually change the lives of more than 2 billion people, perhaps even 3.

The existence of global goals is not in itself a guarantee of acceleration of national policies. But the open assessment of progress by The United Nations thanks to the new indicator will weigh on governments that will not be able to avoid taking into account the progress or delays publicly observed in their country.

“Fifteen years to achieve universal access to true drinking water is short. There is no time to lose”

The good implementation of these objectives involves several steps. Firstly, every country needs to revisit all of its national and local policies on drinking water to identify any deficiency in their objectives and/or speed in relation to the global target. This groundwork will be all the better if the different actors of the sector are involved and the public understands the new target and supports the need to speed up on many state policies.

Then, each public authority responsible for access to water in a territory must establish a plan of action setting the legal, institutional, human, technical and financial means to successfully meet the objectives within the agreed time limit. This may lead to alter the traditional sharing of costs between taxpayers, public service users and those excluded from the public service. At the same time, statistical tracking tools should be amended to take into account the definition of the new indicator. Finally, the mobilization of these resources will produce the expected progress which shall be measured regularly to identify the potential need for corrective actions.

Fifteen years to achieve universal access to true drinking water is short. There is no time to lose. So, in each country, it is urgent that active members of civil society grow aware of the issue and pressure their government for action on these four essential elements – adaptation of policies, establishment of appropriate means, adjustment of statistical mechanisms and regular progress assessment. The more the media will relay this concern, the better. But they have not yet started!

The SDGs bring great hope to all those who need drinking water and wait for governments to give them access to it. If governments act in accordance with their international commitments, these needs can be really and sustainably satisfied within fifteen years.

Lille, France: access to drinking water and hygiene in the slums in the urban area

Nigeria : rising tension in the North-West