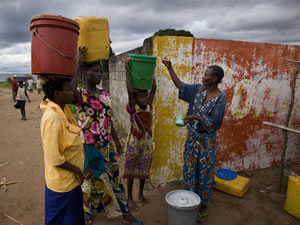 Eradicated over 150 years ago in the developed world, cholera is rapidly regaining a hold all over the planet, with a new epidemic in the Democratic Republic of the Congo, and flare-ups in Haiti, Chad, and Afghanistan.. Gregory Bulit, our water, hygiene and sanitation expert, revisits the ravages caused by a disease from another era.

Deaths on the increase

2011 could well be the year of the eighth cholera pandemic in history, with 1,092 cases and 129 deaths in the western part of the DRC, 100 deaths in Cameroon and Chad, about 10 cases in Abidjan very recently, and flare-ups in Niger, Ghana, Zimbabwe, Nigeria and certainly Haiti, but also in southern Afghanistan.

While the Escherichia Coli virus is causing anxiety throughout Europe, and rightly so, there is little chance of cholera reaching France. The men, women and children who die from cholera are far away, far from the cameras’ gaze and outside our comfort zone. This is what motivates us to take action. Cholera, like any other diarrhoeal disease, is preventable. The case of the Haitian epidemic, which failed to spread to the Dominican Republic although the two countries share the same island, is proof of this difference in treatment of the disease, which only attacks less developed countries.

…which is nonetheless gaining ground

In the DRC, cholera has again taken hold in an area which had been free from the disease for the past few years. Although confined to the eastern part of the country for many years, the disease reached the outskirts of the capital, Kinshasa, on 27th June 2011 as a result of favorable environmental conditions, a social context crippled by conflict, continual population displacements, chronic poverty and the general weakness of the state. The current epidemic began in February, 500 km to the east of Kinshasa, on the River Congo in the town of Kisangani. How did this happen? It is difficult to provide a clear answer. The town is a port, on an important transport route, and has an international airport. The cholera bacterium is always transmitted by a carrier, which is often healthy, and is therefore difficult to identify. In the space of a few weeks, the disease made its way down the River Congo. Transmitted from person to person on this commercial thoroughfare, from insalubrious port to insalubrious port, the bacterium reached Bolobo, 80 km north of Kinshasa.

A rapid response team is sent to the DRC

It was necessary to intervene quickly, before the epidemic hit a town with several million inhabitants. Cholera can be eliminated, but this will require more than medical treatment alone. Cholera won’t wait. Without the means to fight it off, it will continue to spread. And once it reaches the outskirts of Kinshasa, where conditions are unsanitary, it will spread rapidly. To prevent this from happening, we sent a rapid response team to the affected area last July. Since then, we have been implementing awareness-raising activities and facilitating emergency access to clean drinking water for thousands of people atrisk. Our mission is to halt the rapid progression of this contagious and deadly disease, which is so easily prevented.

Yemen: the devastation caused by epidemics

Covid-19 – France: Helping the most disadvantaged in the face of crisis