www.solidarites.org
2.6 million people die every year from diseases related to the water and unsanitary conditions. We as humanitarian actors lead a daily struggle against this scourge. In acting on the ground of the most severe crises, but also by allowing the public, the media and international bodies to hear the voice of those who suffer from this lack of access to drinking water and who cannot speak.

If we prepare each year a state of affairs of this vital resource, it is to better follow the evolution, achievements and obstacles, and verify that the commitments made by the international community are indeed met. In our commitment to inform the public on this issue which mankind must seize for his own survival and development, we also needed to measure its interest and knowledge. This poll has made that happen

ACCESS TO DRINKING WATER: AN IMPORTANT ISSUE TO ALL FRENCH PEOPLE

In your opinion, the issue of access to drinking water in the world is…

Almost all (95%) French people consider that access to drinking water is an important issue
Access to drinking water is far from being a trivial issue for respondents. 95% of our fellow citizens consider it important. “This issue is not a “soft” priority, says Céline Bracq, Director General of Odoxa, since 72% of the French believe there is even a very important subject. It is therefore clearly a subject, which, if it was more publicized, would retain the attention of the public. All categories of French people also overwhelmingly share this opinion, especially executives and entrepreneurs: 74% versus 62% of workers and employees, as well as pensioners (83%).”

About issues related to problems of water worldwide (access to water, diseases caused by ingestion of unsafe water…). Would you say you are: 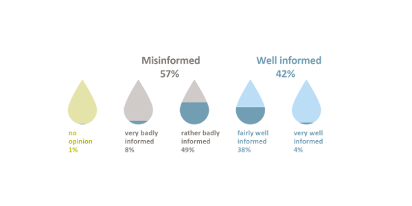 But they are unfamiliar with the topic and greatly underestimate the consequences of the problem of access to drinking water…
The French public is feeling at the moment very largely ignorant on these issues. 57% of the French believe they are misinformed on these topics: 49% ‘rather badly informed’ and 8% ‘very badly’. Workers and employees would be the least informed (65%) and particularly workers (70%).

MORTALITY DUE TO WATER-RELATED DISEASES IS UNDERRATED

In your opinion, how many people die each year from diseases related to the water and unsanitary? 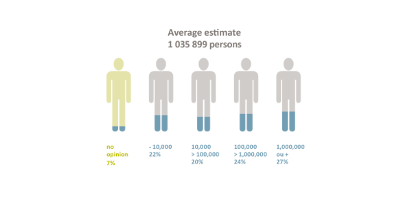 In fact: 2.6 million people die each year from lack of access to drinking water and sanitation, or 5 people every  minute.
“In fact, the small “test” we this representative sample take shows that the magnitude of the issue is poorly perceived, says Céline Bracq. The French estimate at a little more than one million the number of people who die each year due to lack of access to drinking water and sanitation.” They therefore understate over half this dramatic consequence, since it actually is 2.6 million people who die each year because of this lack of access.
“It is indeed difficult to us who have had running water for decades, or even for some generations, to imagine that water kills, adds Alexandre Giraud, SOLIDARITÉS INTERNATIONAL Director of Operations. It is less obvious to consider that this silent and invisible scourge causes more deaths than wars, natural disasters, or AIDS. These are however the dramatic findings that we get every day on the ground and we strive to share each year. ’’

On average, how many litres of drinking water do you use each day? 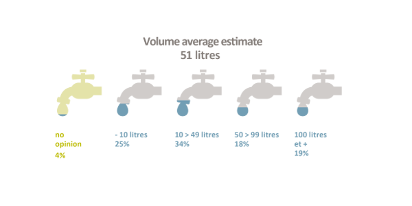 In fact: on average, a French person uses 200 litres of drinking water every day
Few of us know how much water we consume.
Finally, our fellow citizens very strongly underestimate their own consumption of drinking water. The estimated average volume is 51 litres, or four times less than the actual amount consumed by the French (200 litres)! A quarter of the French quote even “less than ten litres”.
“With this last question, Alexandre Giraud continues, we wanted to make them aware of the glaring inequality of access to this vital resource. The figures on the small amount of water to which sub-Saharan Africa has access (15 litres per day and per person) are less obvious when assessing their own consumption this wrongly.”

Finally, the results of this survey lead us to persevere in our work of information and testimony to raise awareness among the general public.
Away from our areas of intervention on which access to water, sanitation and hygiene is a vital need, this action is no less important. We hope that the general public, whether experts, already sensitized or just curious, will see this Barometer shed light, analyses and information that will help them in turn feel concerned by this great issue; a source of life and development, but also conflicts, poverty, diseases and mortality. And it will be careful, vigilant – and critical when needed – with the progress and commitments that international policy makers and water stakeholders such as ourselves must stimulate, follow and respect over the coming years.

A Survey conducted with a sample of French people on the Internet on 11 and 12 February 2016
Sample of 984 people representative of the French population aged 18 years and older.
The representativeness of the sample is provided by the method of quotas applied to the following variables: sex, age and occupation of the interviewee after categorization by region and type of agglomeration.