The number of people worldwide being away from home hit a new record this year, reaching nearly 60 million. Among them: men, women but most of all children.


SOLIDARITÉS INTERNATIONAL offers an insight on the situation of refugees in the world. What is the difference between a refugee and a displaced person? Which countries and people are the most affected? 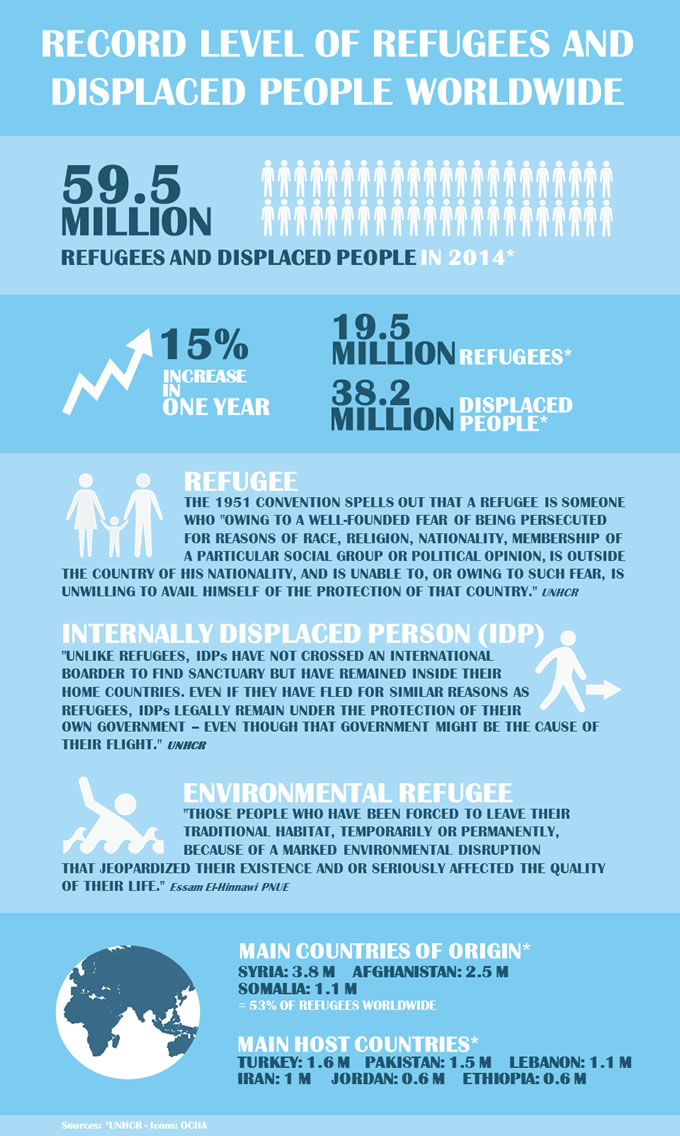 Where do refugees come from?

Even if the concerned populations originate from regions from all over the world, most of the refugees, by country of origin, are from Syria (3.8 million), Afghanistan (2.5 million) and Somalia (1.1 million); these three populations account for 53% of the refugees in the world*.

Where do they go?

Refugees and displaced people: what is the difference?

Internally displaced people: “Unlike refugees, IDPs have not crossed an international border to seek asylum in another country. They stayed in their country. Even if they have fled for similar reasons as refugees (armed conflict, generalized violence, human rights violations), IDPs legally remain under the protection of their own government. That government may itself constitute the cause of their flight.” (source UNHCR)

What about environmental refugees?

In his report for the United Nations Environment Program (UNEP – 1985), Essam El-Hinnawi designated environmental refugees as people “who are forced to leave their home temporarily or permanently due to environmental disruption (natural and manmade) that jeopardized their existence or seriously affected their living conditions”.

Refugees and displaced people have lost everything

Through testimonies collected in the countries where we work, SOLIDARITÉS INTERNATIONAL portrays some refugees who have a particularly moving journey. Whether it’s Habiba, a Central African woman who lost everything to save her life in Cameroon, or Sleiman, from Syria, a father of six who wishes to stand tall in a refugee camp in Lebanon. All refugees have a story. Stories that are reported by SOLIDARITÉS INTERNATIONAL, today.

Because the life of Syrian refugees cannot be reduced to dramatic figures, SOLIDARITÉS INTERNATIONAL wanted to offer the public to understand the daily reality of this unprecedented humanitarian crisis. With Wou Ba’aden, the interactive documentary, available on woubaaden.solidarites.org, live the life of a Syrian refugee in Lebanon. A scenario in which you have to immerse yourself. Confront the challenges that thousands of people are facing every day in a very moving human experience. Here are some examples: