Struck by conflict and drought, populations in the Sahel, including Chad, are heavily impacted by malnutrition.

Located between the Sahara desert and African tropical regions, the Sahel region is heavily impacted by its climate. For several years, an almost continuous drought, has been hampering Chad’s economic development and severely affecting the living conditions of the population, who have been living in poverty for far too long.

MALNUTRITION OUT OF CONTROL

In a country where agricultural land is mostly unusable or damaged, food insecurity prevails. The 4.3% rate of severe acute malnutrition in the Batha region is twice as high as the alert threshold set by the World Health Organisation.

“Children under 5 years of age suffering are from severe acute malnutrition and have a very low weight/height ratio, resulting in rapid weight loss. They are therefore much more likely to fall ill and have a 5 to 20 times higher risk of death than properly fed children,” explains Caroline Courtois, Head of operations for SOLIDARITÉS INTERNATIONAL in the Sahel.

In the Batha region, in the centre of the country, SOLIDARITÉS INTERNATIONAL teams have been working since 2012 to prevent malnutrition among pregnant and lactating women, as well as children aged 6 to 59 months. They distribute food supplements and money, food supplements and money to families with the most alarming food situation so they can meet their basic needs. As child mortality and maternal health are directly linked to malnutrition, our teams are doing everything possible to hinder the disease. 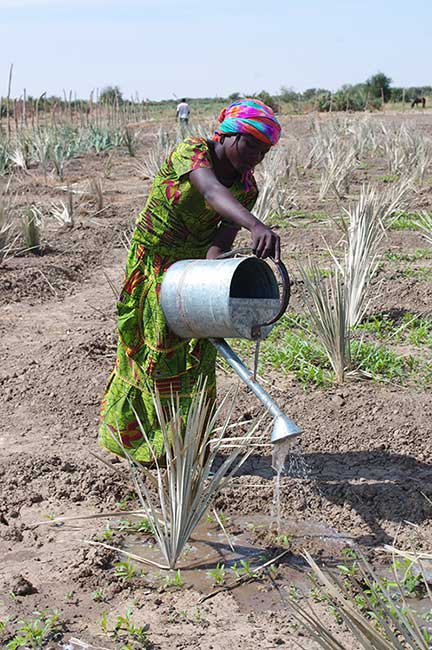 Our teams distribute vouchers that allow families to buy the agricultural inputs and tools of their choice. “Cash for work” actions are also developed, granting occasional income generation opportunities to the inhabitants to give them the capacity to respond to their food needs and to participate in the revitalisation of the local economy.

In local culture, livestock means savings. Therefore, SOLIDARITÉS INTERNATIONAL also distributes goats to the most vulnerable herders. All these actions constitute a direct support for Chadian populations, which are too often powerless in the face of conflicts and malnutrition.

This project was supported by the French Comité interministériel d’aide alimentaire, the World Food Programme and the European Union.

You too can support the Chadian population

Coup d’État in Burkina Faso: What Future for the Already Fragile Population?

An Unprecedented Food Crisis Around the World

Live from the field
Manage Cookie Consent
SOLIDARITÉS INTERNATIONAL and its partners use cookies in order to measure the audience on the site.
Manage options Manage services Manage vendors Read more about these purposes
View preferences
{title} {title} {title}