In Yemen, before the war, 40% of the population had no access to safe drinking water. Today we are talking about 70%.

Battered by 3 years of unspoken war, Yemen, whose water resources were already very low before the conflict, is seeing a large part of its population deprived of access to safe drinking water. This is having dramatic health consequences and confronts the country with one of the most serious cholera epidemics in the world.

WHEN WAR AND LACK OF SAFE DRINKING WATER cause outbreaks

“Cholera is endemic in Yemen and paradoxically reappears during rare rains. It thrives in unsafe water, it is transmitted rapidly and spreads mainly because of poor hygiene practices (no handwashing leads to oral faecal transmission, and open defecation causes groundwater pollution…),” says Yann Julou, program coordinator of the Yemen Emergency Return Team. “Add to that, the lack of maintenance of facilities such as toilets, and bacteria such as cholera spread rapid. It only takes one sick person to infect dozens of others. The lack of hygiene does the rest and so we arrive in Yemen when there are already more than one million suspected cases, with children under 5 representing nearly 300,000 cases”.

In Yemen, the population has less than 200 m3 of water per year per inhabitant. However, below 500 m3, any logic of economic and social development in any country is seriously compromised and conflicts, clan wars, are exacerbated.”

MORE THAN 16 MILLION PEOPLE ARE IN NEED OF WATER, SANITATION AND HYGIENE ASSISTANCE.

In front of this situation, the lack of safe drinking water and cholera, SOLIDARITÉS INTERNATIONAL has opened a mission in the south of Yemen, in the governorate of Lahj.

“There are very few aid actors in this region,” indicates Cyril Blin, Middle East operations manager. “However, the needs are huge in this area driven by food insecurity. It was essential to deploy urgently to help a weakened and destitute population. of the lack of non-chlorinated drinking water is not helping our fight against cholera epidemics, so we have to focus on hygiene practices and conditions, and especially sanitation. 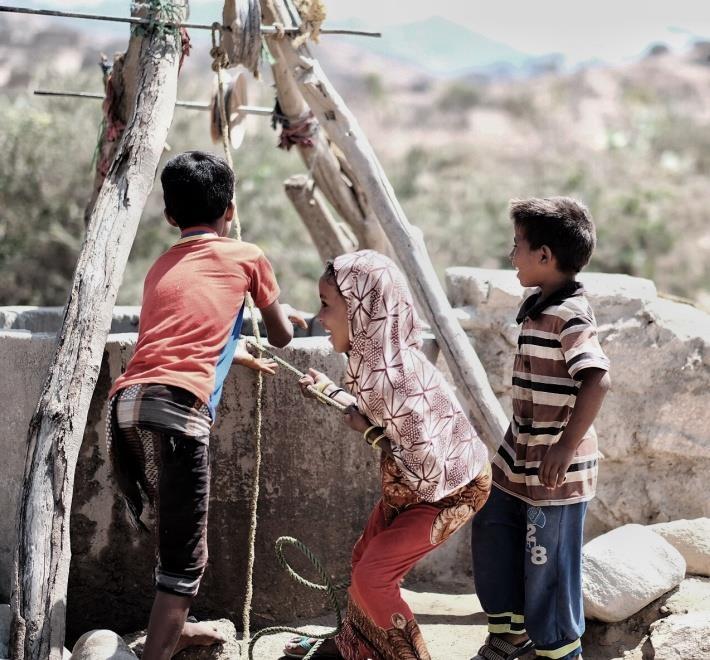 This is why our teams are working in six health centres to provide clean water to patients while health care teams are trying to put an end to the ‘dirty hands disease’”.

While the wave of contagion seems to be slowing down at the beginning of this year, cholera is endemic in Yemen and there is a good chance that new outbreaks will reappear in 2018. “Our teams are ready to intervene urgently to contain a new epidemic,” Yann Julou concludes.

You can help yemen’S population