The famine declaration in Unity State in February draws international attention, but issues are way deeper than they seem. Up North, on the frontline, populations are trapped.

A motorcycle taxi turned upside down, slowly overgrown by weeds. A charred car, in the middle of a deserted street. Empty households, gutted, their bricks spread out in the surrounding courtyards. Malakal, once the second largest city in the country hosting 200,000 people, is nothing but a ghost town today. There is no one left, or almost. First, one soldier, then another. The closer you get to the city centre, the more you encounter. In town, these members of the SPLA (Sudan People’s Liberation Army), the government army, mingle with a few merchants from Sudan, Ethiopia or Eritrea, who still dare do business in a city that has become a garrison town with only 15,000 remaining souls. 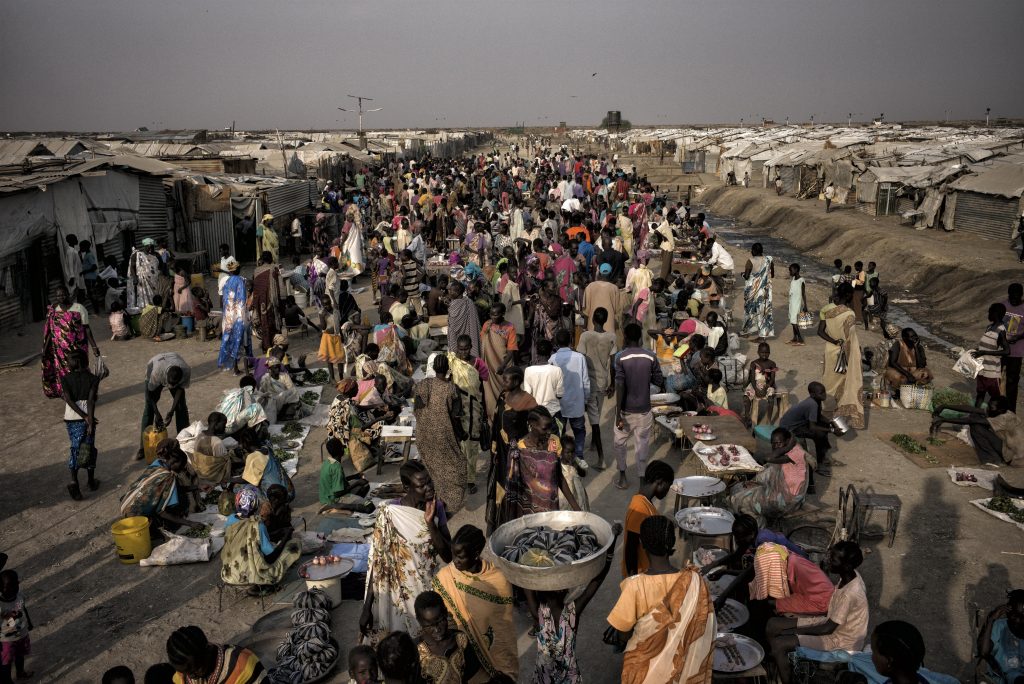 Every day, merchants settle in Malakal POC’s main artery, even though every passing day the stalls are getting emptier.

Previous inhabitants fled up north, heading to neighbouring Sudan. When combat first struck the city, some communities of the Shilluk tribe sought refuge in the United Nations base which is now also a camp for the protection of civilians (POC). There are 30,000 people, crammed in a camp designed for 10,000, who remain dependent on dwindling humanitarian assistance, affected by diminishing funding.
Women can go out of the POC, to sell wood or some vegetables on Malakal town market. Men are cloistered in the camp. They could be taken for rebels, and risk being shot if they set foot outside. “It’s been 4 years since I haven’t been out of the camp, claims Joseph, a community representative in the POC. I can’t even work. Food rations have recently been cut in half. We are tired, we get sick… What choice have I got? Stealing? In our Shilluk culture, it is more honourable to commit suicide than to take from another what is not yours. I have heard of 7 suicides since I got here.” 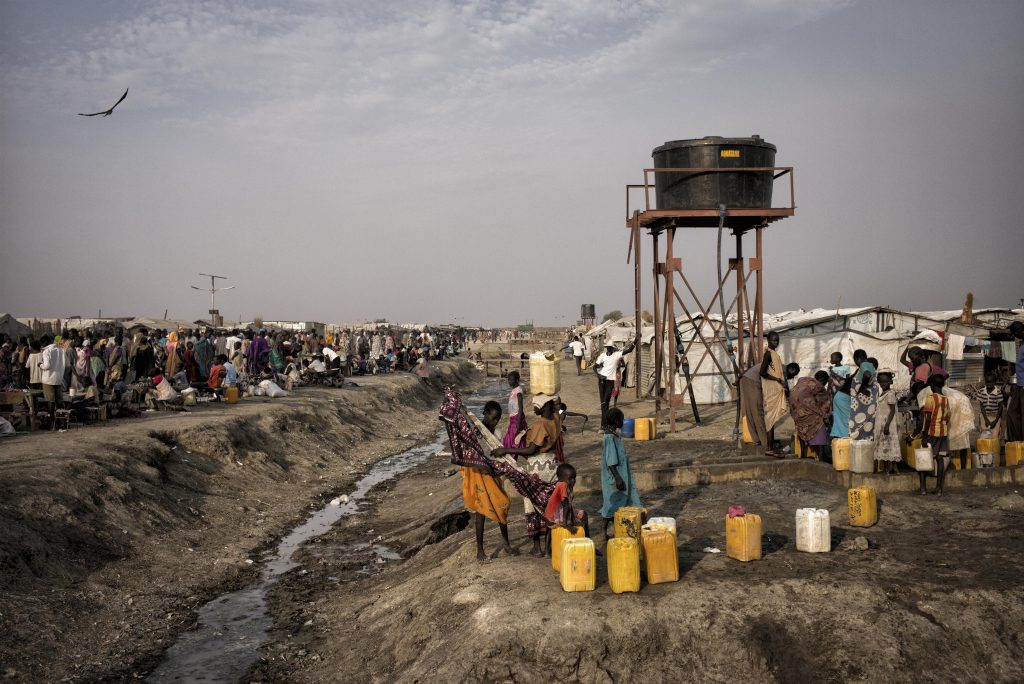 ”How do you expect us to keep up hope?”

Despite his community leader status, Joseph like all other men in the camp risks being killed if he goes out.A few miles north of Malakal, on the other side of the Nile, is the town of Wau Shilluk, cradle of the ethnic group. Still peaceful only a few months ago, the food bowl of the zone has been the scene of violent fighting between SPLA and opposition forces. After having to evacuate and abandon their water supply programs, SOLIDARITÉS INTERNATIONAL’s teams have been trying to return to see the extent of the damage on their base and to check if everyone had been able to flee. Once on the ground, what they found was overwhelming: the city had been burnt to the ground, reduced to ashes, looted. There are those who were killed, those who fled and headed north, and the vulnerable, too weak to move and considered harmless by the fighters. Teresa*, 90 years old and blind, spent 10 days terrified that the combat would reach her house. “It was hard to find food because soldiers took everything. I heard that all men over the age of 18 were being killed.” She was finally rescued by a medical NGO and brought to the POC, with other elder women. The last remaining survivors, these witnesses of horror became ‘the Wau Shilluk vulnerable’. “How do you expect us to keep up hope? We are all going to die eventually!” Teresa concludes, not without a touch of humour, which seems breath-taking under such circumstances.

In order to avoid the worst in a part of the world already familiar with horror, humanitarian organizations are taking action every day to provide emergency relief to people caught in the conflict. 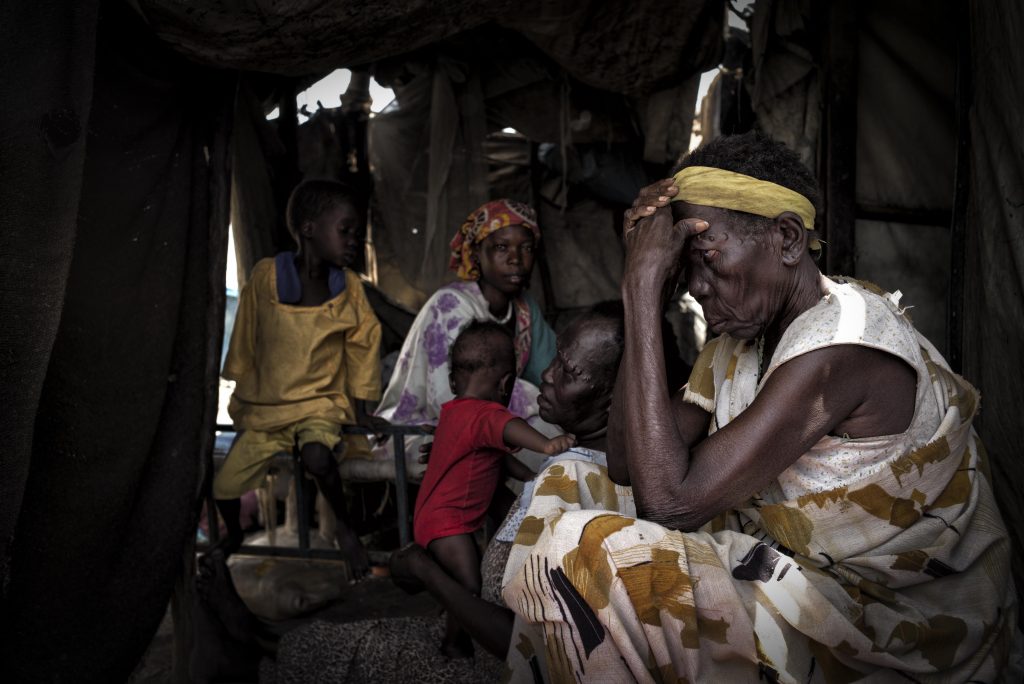 Like a dozen other “Wau Shilluk vulnerable”, too old to flee, Theresa stayed in the town while the conflict was ongoing. Only after the city was burnt to the ground could she reach Malakal POC.

In the confined space of Malakal camp and its surroundings, water provision and hygiene services are daily challenges. The imminent arrival of the rainy season will turn the sandy soil into a giant swamp, isolating numerous zones of the country from humanitarian aid.
“In this camp, where IDPs live in the most cramped conditions, the implementation of humanitarian assistance is very complex. Despite our teams’ efforts, water, sanitation and hygiene needs are far from being covered and the rainy season is going to make things even more complicated, warns Arthur Maurus, Field Coordinator for SOLIDARITÉS INTERNATIONAL. It is tough to pursue the implementation of our activities normally, that is to say installing extra latrines or water points. It is tough also to transport the necessary equipment to repair our infrastructures in the shelter maze. Beyond representing a logistical challenge, the imminent heavy rains in the region will transform the camp in a vast field of mud where excreta and other waste will accumulate. In these conditions, a potential cholera outbreak, already present in the zone, will become reality soon.”
More measures have to be taken to anticipate this outbreak, a worsening food crisis, or the health impact of a civil war that is leading this young country towards implosion.

Support our teams around the world