The protracted crisis in South Sudan has so far led a staggering 1.6 million people on the barren roads of displacement in the past two years alone. Wau Shilluk, in the Shilluk Kingdom on the west bank of the White Nile in Upper Nile State, was originally a village of 3,000 souls before the arrival of 40,000 displaced persons, exerting pressure on natural resources. Yves Bertrand, SOLIDARITÉS INTERNATIONAL’s water, sanitation and hygiene programme manager, describes the situation.

Initially an emergency water system maintenance and solid waste management intervention, our teams’ role in Wau Shilluk became more sustainable to uphold the safety of the living environment for both the local community and the displaced populations. Clean water, hygiene promotion and waste management in the midst of a volatile security situation have become our staff’s daily challenges over the past two years. “Nowadays, the goal of our intervention is to try to make the water supply sustainable for the communities,” says Yves Bertrand. 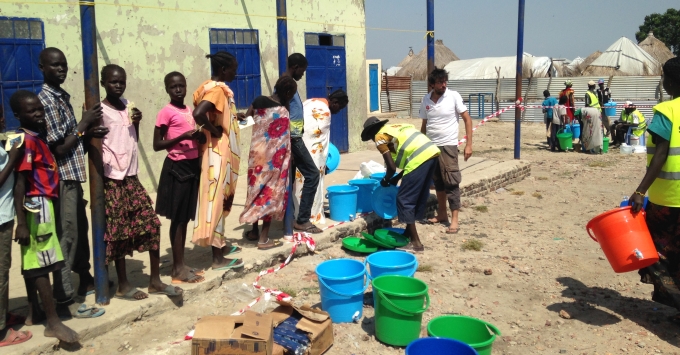 A recent rise in tension, however, made work in the area particularly difficult last summer, when our teams had to halt activities, leaving the population without access to safe drinking water. Since September, activities could resume, though uncertainty remains for the future.

“The atmosphere in Wau Shilluk is pretty peaceful at the moment. Communities are united in adversity and have well understood the necessity of getting clean water. When there was no SOLIDARITÉS INTERNATIONAL staff on the ground, our local water workers kept the water treatment systems running as much as possible. When there is no water at the water point the time for the bladder to be filled and the chlorine to be active, the people wait for it rather than getting water from the river,” Yves adds.

Children as drivers of change 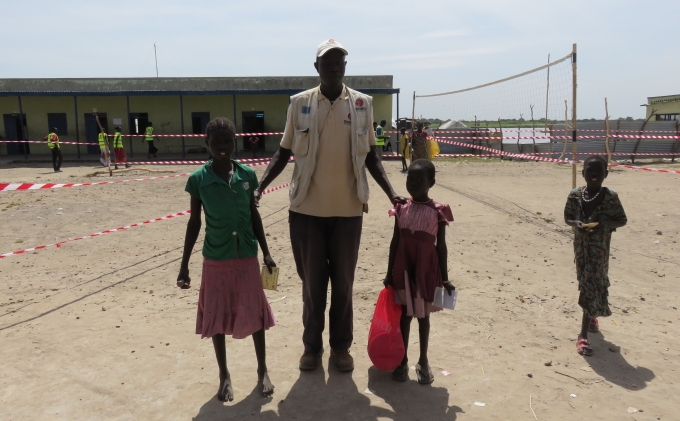 Hygiene being another crucial need for the dignity of the populations in Wau Shilluk, SOLIDARITÉS INTERNATIONAL teams distributed hygiene kits to more than 5,000 households, and worked with the different community members to promote key hygiene messages. “Community mobilization went well, a lot of people showed up and it went really smooth. There were no tensions at the distribution point, again the communities were really supportive with each other. We would like in the future to emphasize our work with children as they are seen as real drivers of changes. The school just re-opened after several months of closing due to the conflict, there is a real possibility to involve children for massive changes in the community.“

The displaced persons in Wau Shilluk are waiting for an opportunity to go back to their home lands when the conflict ends. Another effect the conflict has had on them is the reduced possibility of land access and therefore to cultivation. Not many residents have access to fields, nor can they support their families. Market supply from Malakal has been cut off since the recent events linked to the conflict. “You can only find some lemons, a few tomatoes sometimes, sugar, salt, beans, garlic and some cigarettes, everything being really expensive for the local communities!” Yves Bertrand says.

To cover all these needs, SOLIDARITÉS INTERNATIONAL is currently advocating for more mobilization from donors to continuously support aid agencies working for vulnerable populations, notably in Wau Shilluk, as well as for coordinated actions with different partners focusing on other sectors in order to support these populations.