The state of famine was declared at the end of February in South Sudan. 4.9 million South Sudanese – 42% of the county’s population – need food aid.  100,000 people are in direct mortal danger. Beyond providing a vital emergency help, a long-term assistance will be unavoidable.

Present in South Sudan since 2006, SOLIDARITÉS INTERNATIONAL’s teams provide for populations needs in emergency situations and also helps to anticipate them. In the north, our teams offer a vital access to drinking water, hygiene and sanitation to tens of thousands of displaced people, as priority actions in the fight against malnutrition. 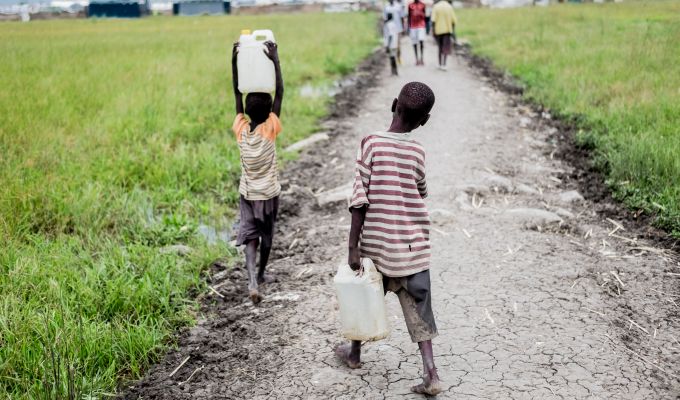 A population dependent on humanitarian assistance

In refugee and displaced people camps, the population is entirely dependent on humanitarian aid, with the food assistance families receive each month. It is the only solution for the displaced since they don’t have access to fields nor to the fruit of their labour. The problem is the same for those who run away from battle zones and seek refuge in the bush.
“Forced to flee almost every month, even though they had the resources, they wouldn’t have time to sow, nor grow, explains Catherine Hiltzer, Manager of Operations in the area. Not to mention the security risk of venturing without protection in the fields. 4.9 million people suffer from food insecurity, three months before the hunger gap.”

Drought and conflicts impede on the ability to bounce back

For these populations, caught between a particularly harsh dry season with temperatures up to 50°C and a rainy season that causes massive floods and catastrophic water-related sanitary issues; have no escape. “Today, we are going to try to provide for their needs in emergency, tells Arthur Maurus, Field Coordinator in Malakal in the north-east, a particularly affected area. The problem with drought and the conflict that lasts, is that it is going to impede on their ability to bounce back on a mid to long term perspective. We are in a situation where aid workers are going to have to support the populations for a long time since there is no possible solution for now, that would allow us to withdraw from the country. This bleak outlook doesn’t leave much room for hope.”

Support our teams in South Sudan