Camp Nasib, on the Somalia-Kenya border. This town of 11,000-inhabitants is one of the poorest areas in the town of Dobley and is faced with a plethora of challenges: climatic shocks exacerbated by El Niño, recurring human rights violations, political instability, major underdevelopment, acute food insecurity, and high malnutrition rates. Internally displaced people (IDPs) are among the hardest hit. Shukri is one of them. 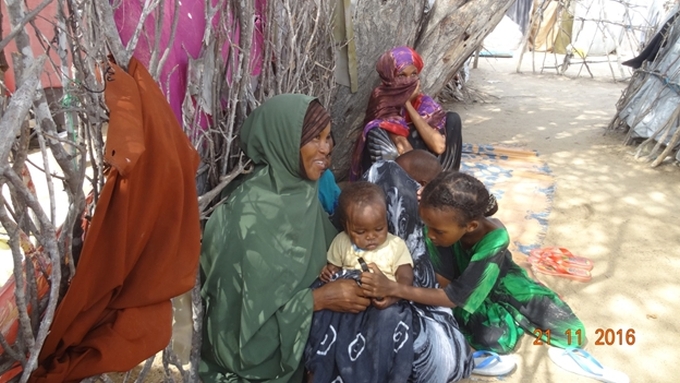 Shukri and her children

Displaced by the recurrent conflict

In Dobley Town, and particularly in Camp Nasib, 80% of the population cannot afford 3 meals a day and a majority is skipping meals as a coping strategy. They are living in difficult and appalling conditions, especially women and children. SOLIDARITÉS INTERNATIONAL is supporting vulnerable IDPs with projects in water, sanitation and hygiene, and in food security. Among them, Shukri was not able to feed and care for her four children and her elderly parents. She is an IDP, she has 6 children, and like many others among the displaced, she left her original home in Buale after militias took over the town in 2014.

The fight against malnutrition

At birth, her youngest child weighed only two kilograms. During the pregnancy, Shukri had hardly had anything to eat, and there were days she could not sleep because of hunger. Her brother who used to help her financially had to stop due to loss of his livestock during recent drought episodes wrecking the region. Shukri had to feed her children with what her neighbors gave her, or she occasionally borrowed food from shops. She could not breastfeed her child throughout the first six months “I had no food. I was unable to produce milk”.

With the help of local Village Relief Committees, Shukri was included into the list of beneficiaries for cash provided by SOLIDARITÉS INTERNATIONAL. It helps her family meet basic food needs including milk for her infant child who has already started adding weight and now looks healthier. “I don’t need to worry about my meals for three months,” says Shukri with a smile. This project allows vulnerable households to buy food, but above all to choose their items themselves, which contributes to their dignity, and to increase their autonomy.

This project is supported by the European Union

FAMINE IN AFRICA AND YEMEN: NUMBERS AND DEFINITION