Anaïs, who worked in the Sindh province of Pakistan from January to June 2012, shares some of her memories from her time there.

Did the fact that this is an international association pose any problems regarding the geopolitical context?

“Being an NGO in the Sindh province does not pose any problems, however in the North it is much more complicated. The Sindh province is far from the Afghan border so we had very few security incidents. I was very apprehensive. I was expecting a relatively closed society, very strict in terms of women’s rights, but in fact it was a real contrast, they were very curious. The people are welcoming, very relaxed. It was more curiosity than aggression: “Why are you here? What are you doing? Where are you living?”, etc. They want to know how you live, there is such a big difference between our daily lives and theirs that, as a result, this leads to interesting conversations. 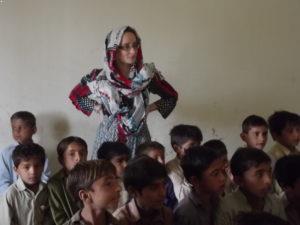 Is there any one thing that affected or shocked you?

“One thing that is noticeable with the Pakistanis as well is that they always ask you the same question: “How do you find Pakistan?” This is because they know what is appearing in the media, most notably, about Pakistan- and it’s never good news. It’s usually ‘there has been another attack, lots of problems at the border’. Where we were in Sindh, they are affected by this. They are proud, and the only thing they ask of you is to discover their culture, in a very open manner.

Do you have an anecdote, or one defining moment from your time there?