Boko Haram group’s presence in the north-east of Nigeria has disastrous consequences on local populations. Despite the recovery of major cities by the Nigerian army, inhabitants who are on the battle lines flee in direction of more or less secured cities. It is the case in Maiduguri, the capital of eastern Borno state, where the population has doubled. The Emergency team of SOLIDARITÉS INTERNATIONAL recounts its first exploratory mission. 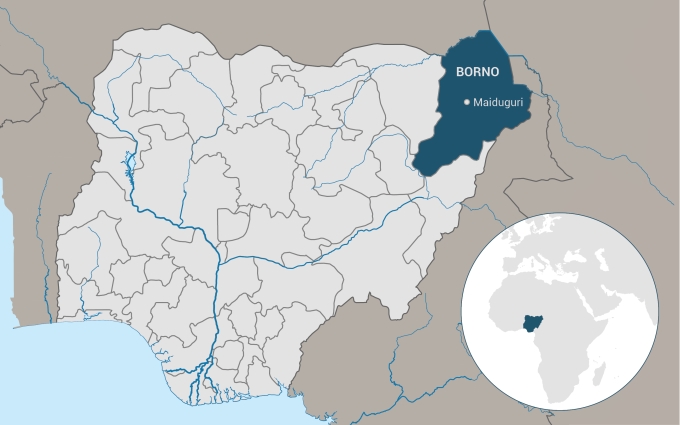 Maiduguri city, one million souls, has welcome about 1.2 million additional people during the past two years, fleeing the conflict areas between governmental forces and the Boko Haram group. “These new entrants have to find shelter, feed themselves, and maintain decent hygiene conditions although the infrastructures don’t have this capacity, explains Xavier Lauth, emergency head of mission. About 100,000 people are located in official displaced camps, managed by State services. The 92% of displaced people left find themselves in informal camps (abandoned or in construction buildings, vacant lots where they build temporary shelters) or are hosted within the community. In addition of which there are about three million people who are living in the areas occupied by Boko Haram and who didn’t profit from any assistance from the humanitarian community as of this day, because of the access and security problematic. State authorities took over the humanitarian answer, supported by many organizations, but needs remain considerable.”

“A city which doubles its population, means twice less resources, twice less water sources, twice less toilets, details Andrea Angioletti, water, hygiene and sanitation referent. We also see critical needs in terms of food security. The malnutrition rates are high, the access to food is complicated, and opportunities to answer these needs become increasingly rare. Some displaced people come from rural areas and do not have the skills to earn a living. There is lots of begging, especially from children.” Nonetheless, the city’s situation is favorable, on a major road, real economic life-line between Cameroon and the Chad Lake. “The market, although it’s functional, does not follow the flow of population”, continues Andrea Angioletti.

The answer of humanitarian actors already there, first concentrated itself on the official camps, managed by a state agency with the support of humanitarian organizations. But this only concerns 8% of the displaced people. The needs of many areas and neighborhoods of Maiduguri city still have not been assessed, hence the need of new humanitarian actors. In terms of security, “although suicide bombing is mainly directed on public areas, there are currently no high tensions in the city. In the future, the multiplication of occidental NGOs could become a potential source of risk if Boko Haram’s operating mode evolved and targeted them”, analyses Thomas Gruel, emergency team logistic referent.

SOLIDARITÉS INTERNATIONAL is considering a first intervention towards people who are with the welcoming community, according to the returns of a second, more detailed, exploratory missions in May.