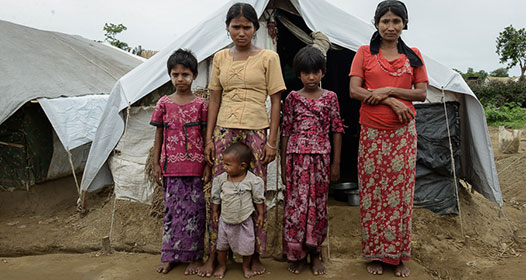 Recent months have seen thousands of Rohingya and Bangladeshi people, fleeing difficult living conditions in their home countries, take to the seas aboard makeshift boats. Since the closure of the Malaysian border a few days ago, they have been trapped at sea, often in appalling conditions. But who are these people, and what exactly are they trying to escape? Christophe Vavasseur, Solidarités International’s Asia Desk Manager, offers some insight.

Who are these “boat people”, adrift at sea?

Most of the “boat people” are from the Muslim Rohingya minority, but there are also some Bangladeshi people. The Rohingya are fleeing oppression in both Burma (Myanmar) and Bangladesh. Over a million Rohingya live in the two countries combined, with hundreds of thousands more living in other countries in Asia. After the inter-communal violence which broke out in 2012, many of them found themselves living in camps in Rakhine State, Burma, where conditions are appalling, and where their movements are strictly limited. They are deprived of access to education and health services, and are subject to stringent administrative restrictions. While the Burmese authorities are engaged in the search for a sustainable solution, there has been very little concrete improvement in the Rohingya people’s living conditions. The entrenchment of this situation gives them an even greater incentive to leave: but they are often unaware of the risks they’ll face during the journey.

Why do they face discrimination in their countries of origin?

The Rohingyas face discrimination from some extremist Buddhist leaders, and from some elements of the Burmese population. These groups consider the Rohingya to be a threat to Burmese identity. It’s a kind of religious nationalism according to which Muslims cannot be considered to be Burmese citizens, nor their presence tolerated on Burmese soil. The situation has been ongoing for several decades, but it’s also a result of the dissolution of the Junta in 2011, which led to the resurgence of religious tensions that had been suppressed for decades, revealing a latent Islamaphobia. But their suffering is not confined to within the Burmese border, and their statelessness – the Rohingyas were stripped of their Burmese citizenship under the citizenship law of 1982 – both makes them outcasts, and leaves them vulnerable to exploitation throughout the sub-region.

Why do they take to the sea? Have they been forced out of their homelands?

They haven’t necessarily been forced out, as such. In most cases, they choose to leave (whether Burma, Bangladesh or another neighbouring country) to escape the fate that awaits them, and in the hopes of making a better life for themselves and their families. But all too often, their lives are shattered.

Where do they come from, exactly? And what kind of conditions do they live in?

The majority of the Rohingya people live in Rakhine State, Burma, or in Bangladesh. Because they are stateless, they are often forced to live in isolated areas, in villages or camps, where hygiene conditions are very poor and where access to basic services is extremely limited. This creates what are essentially lawless areas, where people are extremely vulnerable to human exploitation and severe malnutrition. However, it is hard to have a clear picture of the situation because it’s so difficult for humanitarian actors to gain access to these areas.

Why do we never hear about them in the media?

Although this catastrophic situation is not new, it’s rarely covered by the mainstream Western media, which tend to prefer stories with a more immediate appeal to their audiences. At the moment, people are perhaps more open to the issue because of the tragic events that are happening in the Mediterranean. And it maybe reminds people, albeit subconsciously, of the Vietnamese boat people of the 1970s, which was something of a turning point in the history of humanitarian aid. But the crisis in the Bay of Bengal and the Andaman Sea is regularly covered by the sub-region’s media. It’s a human crisis which people are aware of on a local level. Those actors with the power to change things cannot claim not to know what’s going on.

How and why should we help them?

To put an end to the despair in which these people live – a despair so profound that they’re prepared to risk their lives to escape it – a sustainable solution must be found, and this can only happen at a regional level. Those countries concerned by the issue need to come together and agree on what can be done to stop these harmful trends, particularly under the aegis of the ASEAN (Association of Southeast Asian Nations), whose policy of non-interference reached its limits when so many countries found themselves incapable of properly managing the flow of migrants. Coupled with advocacy actions, solutions to ease suffering, here and now, can only be found by humanitarian NGOs working tirelessly to increase access to these families in order to supply them with decent basic services. There are only a handful of us who manage to do so. SOLIDARITÉS INTERNATIONAL is one of the main actors working on this issue in several of the countries concerned.

What is SOLIDARITÉS INTERNATIONAL doing to help them?

SOLIDARITÉS INTERNATIONAL is working to ensure that at least some of these people have access to clean drinking water, in camps for displaced people or in host villages. These populations already face serious problems stemming from the scarcity and salinity of water available. Hygiene conditions are generally appalling. One of our goals is therefore to improve sanitation and encourage the adoption of good hygiene practices. This helps reduce the risks of epidemics and lower morbidity among the most vulnerable segments of the population, without interfering with their way of thinking – which sometimes leads them to take to the sea. The responsibility for rescuing those stranded at sea, and for ensuring that International Law is respected, lies with states. Once people take to the sea, there is very little we as humanitarian NGOs can do to help without taking serious security risks. But working to help them as long as they are still on dry land is a considerable feat – and it’s something we can be proud of, given the many difficulties we face in trying to do so.

Myanmar: the challenge of water supply in Pauktaw

Two Years On: Rohingya Deserve Justice, A Place at the Table