Since last April, SOLIDARITÉS INTERNATIONAL has been providing aid for Syrian refugees in the districts of Zgharta and Minieh-Denniyeh, in northern Lebanon. To compound their already critical situation – makeshift shelters, lack of drinking water, hygiene, and food – winter has now arrived with its sub-zero temperatures.

“We want to go back to Syria.” These are the words that Syrian refugees often say first. It is an expression of will, emphasized by a firm handshake or a steady gaze, which sounds almost like an introduction. “We didn’t choose to come here”, they insist. 1,900,000 Syrian refugees have fled their country since the beginning of the conflict in spring 2011. More than 2 years of war, 6000 people who flee Syria every day, a number which has not been exceeded since the Rwanda crisis. It is little Lebanon which is proportionately paying the highest price for the upheavals of its neighbour. According to the UN, one million Syrians from all walks of life and all ages have taken refuge in Lebanon. Soon, every fourth person in Lebanon will be a refugee, in a country which is only slightly bigger than Corsica.

In Minie district, in the North of the country, tens of thousands of people now live along the main coastal road. In the North-East, barely 15 kilometers away, is Syria. About fifteen families are living on this land, for a rent of 100$ per family per month from a local land-owner. Since the average income per family is estimated at 150$ per month, rent is the main expenditure for the refugees. Unfortunately, it is not their only problem.

Fatima, who comes from the outskirts of Homs, has been here for just over four months, fleeing the bombings. In the darkness of her tent, there are nine children. On her daughter’s skin there are red blotches, which look like burns: “The water is contaminated. It is the children who fall ill first.” 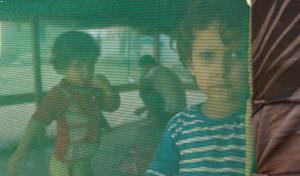 Children, the first victims of disease

The couple in the next tent arrived from Hama 9 months ago. Their house disappeared in a cloud of smoke, from a bomb dropped by the regime’s aviation force. Ziyad, a lorry driver, had his truck confiscated by the army. Their tent is empty. “The hardest thing when you are a refugee and you have to live in a place like this is hygiene, and trying not to get ill.” Alas, for this young couple, it is already almost too late. They are very worried about Hana Rachet, their 13-month-old baby. She looks as if she is disarticulated, she can no longer hold her head. Her eyes are glazed. “When we left Syria, she just had a temperature. When we arrived here, it spread to her spinal cord. The doctor doesn’t know what is wrong.” Ziyad knows that his daughter’s illness is complex, but he is angry. He picks up a section of his tent, and finds a pile of rubbish rotting in the sun: “It is because of all this filth and excrement.”

Like most of the Syrian refugees, Yazi and Ziyad refuse to be photographed. The fear of being recognized by the regime is too strong. One man accepts, but only his back, and using a false name: Muhammad. “We were schoolteachers. But that was before. Now we are refugees,” he says, as if to put an end to the conversation.

In these improvised camps, SOLIDARITÉS INTERNATIONAL provides emergency aid on all fronts: water, sanitation, food security, hygiene, housing rehabilitation. “When we arrived in Lebanon in March 2013, there were around 16,000 refugees registered in these two districts, explains Jérôme Voisin, field coordinator. There are now 43,000 of them, nearly three times as many!”

SOLIDARITÉS INTERNATIONAL has taken care to provide appropriate responses to the refugees’ problems, almost on a case by case basis. “This is not a normal crisis. Most of the people we are assisting had a middle-class standard of living before, in a developed country. They became refugees overnight, forced to survive on a day to day basis. So they are not at all armed to manage in this sort of situation.” 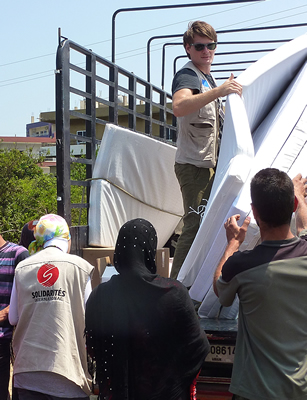 This observation shows itself to be true on the ground: those who arrived a year ago with some savings were able to rent an apartment for a certain time. But today all their savings have been used up, because the cost of life is 40 to 50% more expensive in Lebanon than in Syria and the daily work market which is open to Syrians is totally saturated.

Marginalised, and more and more vulnerable

SOLIDARITÉS INTERNATIONAL attaches great importance to involving local authorities and populations in the assistance provided to refugees. This is the case at a camp in Zgharta district. To reach this camp, you have to go down a small road in the heart of the village, then down a steep slope into a cellar. It takes a few minutes for your eyes to grow accustomed to the darkness before you see them: 80 people, mostly women and children, are living there, 3 metres below ground, the only light coming from two basement windows and a garage grating.

A report by Marine Pradel

Here, SOLIDARITÉS INTERNATIONAL has installed toilets and set up plywood panels, so that each family can have a minimum of privacy. The landlord demands 600 $ per month rent for this cramped space. “We used local companies to carry out the rehabilitation work, explains Jérôme Voisin. The idea was to show that the refugees’ presence actually generates increased economic activity.” The solidarity which Lebanon has shown for the first two years of conflict is likely to be jeopardized by the festering situation in Syria and the ever larger numbers of refugees arriving every day. The onset of winter brings concerns that hundreds of thousands of people living in tents or disaffected buildings will then be in an extremely desperate situation.