An animated film that seeks to raise awareness of cholera transmission and prevention has become a useful tool for SOLIDARITÉS INTERNATIONAL’s hygiene promotion team. The screenings have been a hit with Syrian refugees living in Lebanon. Here’s a look behind the scenes.

‘The Story of Cholera’ is a five-minute animated film produced by the Global Health Media Project (GHMP) in collaboration with award-winning animator Yoni Goodman.

“The film sets out to present cholera transmission, prevention, signs, and care in a simple and accessible way,” explains Deb Van Dyke of the Global Health Media Project. “Since its creation in 2011, it has been used to promote good hygiene practices in 200 countries.” One of these is Lebanon, where SOLIDARITÉS INTERNATIONAL has been working since March 2013 to improve the living conditions of Syrian refugees in the north of the country, reducing their exposure to water-related diseases. 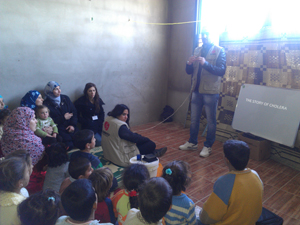 “’The Story of Cholera’ has become an essential part of our hygiene promotion activities in Lebanon,” says Miguel d’Arcangues, SOLIDARITÉS INTERNATIONAL’s WaSH (Water, Sanitation and Hygiene) and Shelter Coordinator. “Since March 2014, we have held 50 screenings in high-density refugee settlements where hygiene conditions can be challenging. Although the showings were initially aimed at children, we found that the film appealed to adults, too. So far, over 1,150 people have seen the movie, and the response has been overwhelmingly positive.”

And word is spreading quickly. One Syrian refugee, waiting for a screening in his own settlement, said: “I’m excited to see the movie because I’ve heard about it from people living in other sites.”

A reflection of reality

Although there are considerable differences between the setting of the film and the daily reality of life in Lebanon for Syrian refugees, the central message is familiar. “What the film shows is happening here,” confirmed one audience member.

“’The Story of Cholera’ is one of the most effective tools we have,” agrees one member of SOLIDARITÉS INTERNATIONAL’s hygiene promotion team. “It really reflects the issues people face in their day-to-day lives. And this makes it easier to retain what they see in the movie.”

Translating the message for an Arabic-speaking audience

SOLIDARITÉS INTERNATIONAL’s involvement with ‘The Story of Cholera’ goes beyond simple screenings: our team also worked on the translation of the script into Arabic.

“SOLIDARITÉS INTERNATIONAL’s hygiene promotion team was looking for innovative ways to relay key messages on the transmission of water-related diseases when the translation proposal from GHMP came through,” explains Miguel d’Arcangues. “We first did a short field test with a ‘homemade’ translation to assess its acceptance by the Syrian community. As the feedback was really positive, the team went on to produce a proper audio translation which GHMP then dubbed into the film.”

Indeed, the Arabic version of the movie is now an essential tool, used by other humanitarian actors working throughout the country. A good example of how SOLIDARITÉS INTERNATIONAL’s teams are taking aid further, this time in Lebanon.