Responding to the emergency of unsafe water by installing water treatment stations, rehabilitating and constructing water points and preventing water-related diseases, these are SOLIDARITÉS INTERNATIONAL teams in the Nippes region of Haiti’s three main lines of response after the passage of Hurricane Matthew in October 2016. 3 axes which, in addition to allowing the inhabitants to drink, have only one objective: to reduce the risks of cholera spread.

Every day, 100,000 litres of water supplied by tanker trucks

In the days following Hurricane Matthew, SOLIDARITÉS INTERNATIONAL teams worked to provide emergency drinking water for the victims of the hurricane. “Five water points have been installed in different municipalities in the Nippes region. In total, these flexible tanks have provided more than 100,000 litres of water to more than 7,000 people every day,” explains Pierre Desvillettes, Water, Sanitation and Hygiene Manager.
“Today, some of these installations have been dismantled due to the repair of some networks. On the other hand, other reservoirs installed in October are still in operation, as in the Dupuy healthcare centre. 5,000 litres of water are delivered every day and provide access to drinking water for doctors and patients,” Pierre continues. 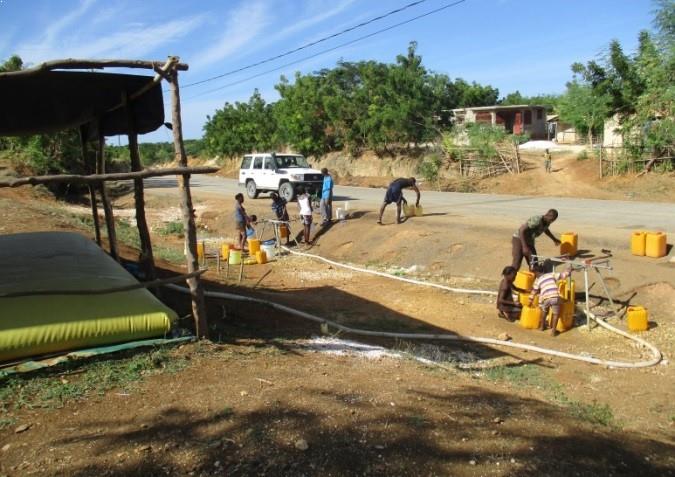 Treating water as a priority

Water trucking is unfortunately not enough to cover Haitians’ long-term needs in the Nippes. Since then, more sustainable solutions have been devised and implemented by our teams, including the construction of water treatment plants. Two stations were built in emergency only a few weeks after Matthew passed through. Together, they produce 21,500 litres of drinking water per day, thus enabling nearly 1,350 people to drink safe water at a rate of 15 litres per person per day.

In Haiti, water networks were severely affected by the 2010 earthquake. When Hurricane Matthew struck last October, much of these already fragile networks were once again damaged. “Over the past 4 months, we identified, with the help of the Haitian Water Agency (DINEPA), 4 water networks to be rehabilitated, says Pierre Desvillettes. We started the work, which should take several weeks. Pending completion of this work, 38 chlorination points have been set up at identified water points identified as being at risk. This systematic chlorination prevents the spread of diseases, cholera and diarrhoea in the first place.”

Hygiene, a bulwark against cholera

After Matthew, the population sought refuge in community shelters, including schools where health facilities were not adapted to accommodate so many people. We will therefore disinfect and rehabilitate the latrines in these schools, install hand washing machines and provide hygiene promotion sessions for students and teachers. It is an extremely effective first barricade. Coupled with adequate hygiene conditions, diarrhoea and cholera outbreaks can then be reversed.