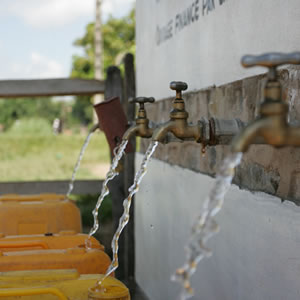 Since 2008, SOLIDARITÉS INTERNATIONAL has played a significant role in the national strategy for the elimination of cholera in the Democratic Republic of the Congo.

Through a project aiming to restore a drinking water network in the town of Kalémie (population approx. 250,000), an area deemed a priority in the fight against the disease, SOLIDARITÉS INTERNATIONAL has developed a strategic partnership with the local REGIDESO (Water Distribution Management Company) to optimize the impact of the network improvement works.
In 2012 the project entered a second phase which was of crucial importance in strengthening the transportation and distribution of drinking water from twenty 10m³ stand pipe tanks and improve water availability for more than 1,400 private users.

The first few years of the project have already seen a decrease in the number of cholera victims per year. Nevertheless, the objective remains the same: to reduce the exposure of the population to this disease as much as possible by implementing additional projects to improve town sanitation.

SOLIDARITÉS INTERNATIONAL is currently working on the second phase which consists of rehabilitating the delivery pipe from the REGIDESO treatment station to improve the flow rate. This will provide a better service for the northern areas, which are considered to be the most at risk from cholera.

Ebola in DRC: one year after the first cases, our teams mobilized

DRC: The relentless fight against cholera