A few days after the severe hurricane that battered the Satkhira district, situated in the south-east of Bangladesh, where SOLIDARITÉS INTERNATIONAL take action since 2010, our teams take action to provide emergency relief to the affected population.

Often affected by natural disasters, the Satkhira district, situated in the south-east of Bangladesh, was once again seriously affected by hurricane Amphan on May 20th. Winds over 130 km/h (80 mph) battered the region and led to massive floods, destroying or damaging 330,667 houses, 150 km (90 mi.) of dikes, and 1,100 km (680 mi.) of roads, as well as harvests and fisheries.

Overall, according to the estimates of SOLIDARITÉS INTERNATIONAL and their partners in the field, 564,616 persons out of the 1,9 million inhabitants of the district now have urgent needs of shelters, water supplies, care products, and food.

Risk of epidemics and threatened livelihood

The most vulnerable people, who lived in makeshift shelters with insecure access to water and sewerage or that may have been compromised by the previous hurricane of November 2019, are greatly impacted.

The aftermaths of the hurricane Amphan are the saltwater intrusion in the water sources, the latrines’ overflowing but also latrines’ destruction forcing people to do their “business” outside, which could provoke waterborne diseases.

Saltwater intrusion on the lands and harvest destruction could also disrupt food supply and have a lasting effect on people’s livelihood, which are mainly linked to agriculture.

Involved since 2010 in the Satkhira district to support small farmers that are regularly exposed to the consequences of natural disasters, SOLIDARITÉS INTERNATIONAL has decided to intervene immediately to provide an emergency response to the affected populations. The day after the hurricane, we decided to act quickly, and we allocated a contingency fund. 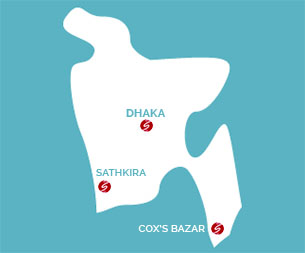 As a first step, we transported to Satkhira, 1,943 emergency shelters kits (consisting of tarps and ropes) from our emergency stock in Teknaf, located at the other end of the country. Those kits were given to 9,000 persons among the most affected. This logistical challenge was made possible thanks to the determination of our teams despite the Eid celebrations, which are non-working days in Bangladesh, and the contingency measures (lockdown, trucks disinfection) put into place by the authorities for weeks regarding the current Covid-19 epidemic.

While the Covid-19 epidemic is still really active in Bangladesh, our teams implemented necessary precautions and will keep implementing it as long as they are of the field: social distancing measures, encouraged hand washings during distributions, etc.

Subsequently, SOLIDARITÉS INTERNATIONAL is considering renovation interventions for water sources and health infrastructures and cash distribution to allow people to meet their basic needs as well as reconstruction activities or renovations of destroyed infrastructures (dikes, bridges, roads…) for the sake of natural disasters mitigation.

YOU TOO  HELP US  AGAINST THE EMERGENCY, SUPPORT OUR ACTION IN BANGLADESH