Sylvain, Project Manager, spent for years in Bamyan Province. He told his story to SOLIDARITES INTERNATIONAL.

How did you start working as a humanitarian?

I did my first humanitarian mission in Afghanistan, in 2003. I spent four years in the Bamyan province, two of which as Project Coordinator in Yakawlang. At that time, SOLIDARITÉS INTERNATIONAL was one of the few humanitarian organizations working in the province. 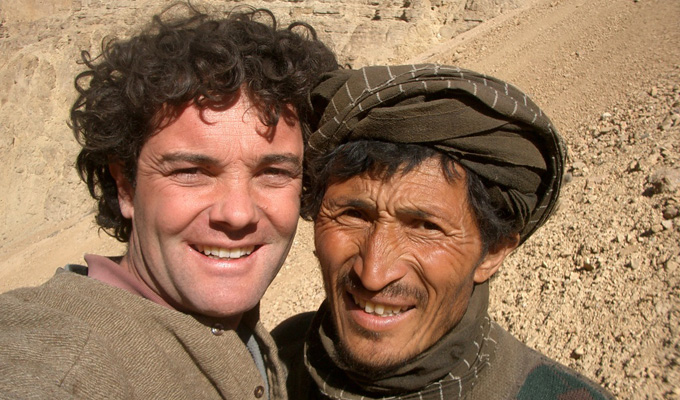 I was responsible for managing a project that addressed the problem of agricultural recovery, following the Taliban incursions in the district. I was trusted with real responsibility, and from the very beginning, I was expected to complete my missions. Security conditions between 2002 and 2008 allowed us to lead an almost normal life and take advantage of the attractions offered by the country. You could also stay on the same project for a long time. This made it possible to learn the Afghan-Persian language… in my case, with the team-cook!

Since 2011, and following various other long-term missions, I have been spending my time between agricultural activities in Southern France and short-term diagnostic training and evaluation missions for rural projects. In this context, I often travel to Afghanistan, most often with SOLIDARITÉS INTERNATIONAL, but sometimes with other organizations too.

Which memories do you treasure of this experience?

I have a real attachment to SOLIDARITÉS INTERNATIONAL, whose roots are in Afghanistan. I spent some wonderful years there, thanks to a combination of coherent projects, stable expat teams and stable national teams. It was possible to bond with the teams, but also to live peacefully in a natural context of beauty that I never managed to find anywhere else. Moreover, I never tired of the Afghans’ almost excessive politeness and hospitality!

In Afghanistan, we not only enjoyed the view of the mountains, which towered over us stately fashion, but we were able to hike in the mountains. This is still the case today, even though things are less comfortable than before. In the 2000s, we led a more or less normal life in the Bamyan region. I lived in a house that was 500m from the office, and I used to cycle to work. On Fridays, the rest day, we would go hiking, take trips to Lake Band-e Amir…and even play football with young Afghans!

I met the woman of my life there

I also met the woman of my life in Afghanistan. She too was working for SOLIDARITÉS INTERNATIONAL. We got married on the banks of Lake Band-e Amir with all our teams, reunited for the occasion. For our honeymoon, we made a week-long visit (on foot) to the various SI missions in Hazarajat, and were put up by the local population. It was a lovely way of saying goodbye to the country and the teams, as well as meeting up with many people with whom we had worked along the way. It was honestly the best time of my life, without any doubt!

What sort of relationship did you have with your Afghan staff?

At the same time, there is a whole new generation with an excellent academic background, who are now starting their professional careers with SOLIDARITÉS INTERNATIONAL. These staff are mainly young people whose families fled to Pakistan or India during the war years. The national team of SOLIDARITÉS INTERNATIONAL therefore consists of young graduates who have studied economics, geography or sociology. They maybe have a less technical profile than would be the norm, but can boast a very high degree of academic knowledge, and are keen to put it into practice with SOLIDARITÉS INTERNATIONAL. Indeed, they represent a real asset, since animation and mediation are essential elements in our work. This recent wave of recruits is generally motivated and gifted; they have a strong desire to remain with SOLIDARITÉS INTERNATIONAL, but also want to advance quickly in rank. They are often responsible for interesting schemes because they wish to contribute to the development of the organization. It is up to us to ensure their loyalty! Some have worked with Shafi, the old Log Coordinator of the mission, who came to France for training at HQ, and who is now in South Sudan as an expat. I have often heard them say: «My dream is to be like Shafi !»

What is the position of women at SOLIDARITÉS INTERNATIONAL and in Afghanistan?

We must provide better internal training so that they can cover positions of responsibility. At this stage, they are fully involved in the startup phase of projects, but have no decision-making role. We must give them the same possibility as their male colleagues, so that they can become a strong source of proposals within our organization. The conditions exist for this to happen in the Bamyan province, and it will no doubt be a positive influence on our access to Afghan women and the relevance of our actions towards empowering them within their community, stepping outside of the demagogic discourse on gender.