A long-time member of Solidarités International’s national team in Afghanistan, Shafi is preparing for his first mission as an expatriate. Destination: South Sudan, where a new context brings new challenges.

I first got to know Solidarités International when they were still Solidarités. I was living in Kabul and I used to see the Solidarités logo in the streets of the city. It was familiar to me, but I didn’t know what it meant! This would have been around 1993 or 1995. At the time, Solidarités were conducting WaSH activities in Kabul. Nothing was working: the water supply network was unfinished, and a lot of infrastructure had been damaged by the conflict. Solidarités was connecting the water supply system, repairing pumps and building reservoirs. Where there was a gap, they would try to fill it. As a result, they were very well perceived by the people.

My first steps as a humanitarian

A friend told me that an international NGO was looking for a stock keeper and he gave me the address of the office. When I arrived to submit my application, I saw that logo again and immediately made the connection. This made me even more determined to get the job! My motivation must have convinced them as they took me on, and within a few months I was responsible for all the stock throughout the country. Five years later, I was promoted to Logistics Coordinator. I was the first Afghan to have the job – but not the last. I’m proud to say that my Deputy, Raouf, took over when I left.

This is one of the reasons I’m so attached to Solidarités International: they’ve always been willing to give me opportunities to grow professionally. They also helped me widen my skill set. With their support, I completed a BBA (Bachelor’s degree in Business Administration). More recently, I came to France for training in Supply Chain Management at Bioforce Institute.

I’m the first member of the Afghan team to be expatriated. One of the things that made me want to take this step was talking to expatriates, who would share their experiences of other missions they had worked on. It was amazing to hear about all the different contexts Solidarités International works in and, in a way, I was a little bit jealous! It put the fire in me, I guess you could say.

Having worked in the same context for so long, I began to feel like I was living in a bubble. I needed to make an effort to break out of it. My humanitarian impulse was growing, day by day, and I felt that I could be more useful somewhere else.

I went through the interview process and was validated as an expatriate. South Sudan was the first opportunity that came up and although I know it won’t be easy, I’m excited. In South Sudan, I’ll face new challenges. It’s a completely different context and the humanitarian needs are immense. 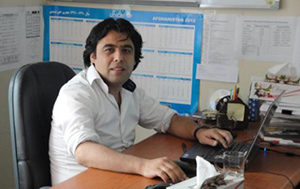 “A friendly atmosphere, interesting projects: why would anyone want to leave?”

In my experience, the expatriate members of the team quickly become attached to the Afghanistan mission. For me there are three factors that contribute to this. First, the atmosphere on the mission, which is both friendly and professional. It’s quite distinctive: I don’t get the same feedback from people working for other organisations. At Solidarités International, you can be friends with your colleagues, and continue to have a good professional relationship.

It’s also a question of pride, in a way. For some expatriates, working for Solidarités International means working for the Afghanistan mission. The two are one and the same.

And of course when you work on a project that’s successful, when you see that you’re helping people and see that they’re happy, that obviously makes you want to continue. That’s what humanitarian work is for, after all : making life better for people.

Taking all this into account, I’m not surprised that people find it hard to leave!

The current WaSH Coordinator is an expatriate who has come back to Afghanistan three or four times. He can’t stay away! We’ve become good friends over the years. At my leaving party he made a speech where he said, “This is not an easy decision. It’s a brave decision”. That was really nice to hear.

Of course it’s hard to leave my country, my family, and the colleagues I’ve been working with for almost fifteen years. But I know that we have a good team, and that they are perfectly capable of handling things without me. I’m not worried!

I hope too that I will serve as an example for my colleagues. I don’t mean to be boastful, but I want them to have the same opportunities I have had. Wish me luck!