Since heavy fighting broke out between the Pakistani armed forces and the Taliban in North Waziristan Agency in Pakistan in June 2014, over 290,000 Pakistanis crossed the border to seek refuge in Afghanistan. To this date, some 24,000 persons are still living in Gulan refugee camp, in Khost Province, 10 km away from the Pakistani border. SOLIDARITÉS INTERNATIONAL has been ensuring the provision of services in the camp since September 2014 and in the surrounding host communities since September 2016. 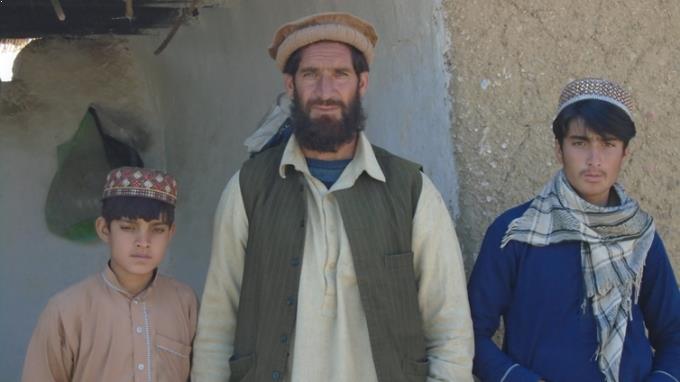 Narges is 18 and lives with her mother, father and 4 brothers in one of the 1,600 compounds that make up Gulan camp. Her family has been living here since the fighting spurred in Pakistan, over two and a half years ago. Back in Pakistan, they had been living for 14 years in Miramshah, the capital city of North Waziristan Agency and a Taliban stronghold since 2001.

“In Miramshah, life was good. My father sold clothes. One of my brothers helped him. I didn’t go to school though, it was not allowed for girls.”
But one day, everything changed: “There was a bomb blast near our village, and we were accused of protecting the Taliban. We had 15 days to leave the village”, she remembers.
“No one could go out; they killed anyone who came out of houses, even the animals. My uncle and his son were killed by an airstrike. So one night, we decided to leave by car with 5 other families. We only left with the clothes on our backs.”

A warm welcome by their Afghan neighbours

Narges and her family fled to Afghanistan because they feared for their lives. They were given food, bread, vegetables, tarpaulins and blankets by the local government. NGOs working in the camp also provided them with a tent and additional blankets. “The Afghan people and government have been good to us” assures Narges.

“Now it is better. It is safe for us here, and Afghanistan is better for women, we can go to the bazar to buy clothes and we are allowed to go in a car,” Narges explains. Daily life has now been organized in the compound they share with 4 other families.

“Our biggest problem is that we don’t have work, so we stay at home…” Her father spends his days at home, as there are little job opportunities in the camp: “Sometimes, he sells clothes in the camp on behalf of an Afghan shopkeeper from Khost City, enabling him to earn some cash.” On occasions, they were given some wheat, but it was merely enough to cover a month for the entire family. “It’s hard because it’s not enough. Sometimes we ask for food or anything we need from our neighbors and then we try to give them back the next month,” she explains.

Supporting refugees in their ordeal

SOLIDARITÉS INTERNATIONAL proposed cash for work activities funded through the Common Humanitarian Fund, coordinated by the UN office for the coordination of humanitarian affairs (OCHA). The activities aimed at improving camp conditions and involving the refugees helped Narges and her family. “It was good for security and it gave us money to buy food”, her father says.

Under another program, funded by the European Union, Narges’ family thus benefitted from distributions of hygiene items such as soaps, toothbrushes, toothpaste, combs, and cotton clothes. 6 months ago, they were also given a cash stipend and materials to build two latrines and bathing facilities in their compound. “The new latrines are good for our health, Narges explains, there is no smell and no flies anymore”.

Refugees taking an active part in the relief effort

In addition, Narges also participated in the hygiene promotion sessions provided by SOLIDARITÉS INTERNATIONAL female teams, and disseminating key hygiene messages aimed at preventing diseases and ensuring a safe environment for the camp population. “I learned a lot from hygiene promotion sessions, she explains. For me, personal hygiene is very important so I was glad to learn that I needed to wash my hands before eating and after using the latrines. As I work in the house, I also learned how to store water and to protect it from animals. Water is very important for us because we can’t live without it. There have been a lot of good changes in our lives in two years.”

When asked about their future, Narges’s response is clear: “We want to stay in Afghanistan. We’re not returning to Pakistan.” As living conditions are still unsafe in Pakistan, Narges’s family is part of the 4,500 that still live in the camp today.

In 2017, SOLIDARITÉS INTERNATIONAL will keep working to ensure the provision of drinkable water, sanitation and hygiene services to Pakistani refugees in the camp, while also extending its assistance to refugees and host communities living in 26 villages of 4 districts in Khost Province.