In Afghanistan’s Bamyan province, people’s main sources of food and income are agricultural production and livestock farming, heavily relying on natural resources available in their surrounding environment. Year after year, their livelihoods have however been highly affected by the degradation of these resources, due to entrenched unsuitable practices, as well as to climate change. 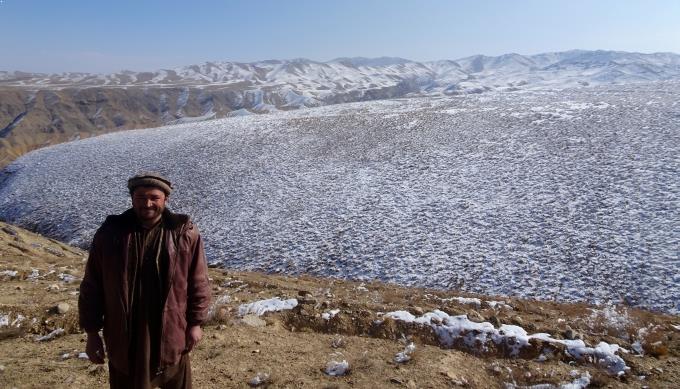 Ainullah, 30 years old, is a farmer living in the village of Sokhta Chenar, located on the road between Saighan and Bamyan.

The construction of two irrigation canals enabled to better capture the water and drain it to farmer lands. As an active member of the village’s Community Pasture Council (CPC) created by SOLIDARITÉS INTERNATIONAL in 2013, Ainullah outlined the activities being implemented. ”We can manage water better and irrigate our lands”. More water is available for farmers to irrigate crops and fruit trees, and especially potatoes that are a high-water consuming crop. Ainullah added that “with the new concrete canal, the agricultural yield of many farmers in the village has increased over the past 2 years and more fruits can now be produced”. In the area, some farmers indeed have a small orchard growing mainly apples, apricots and almonds. Dried apricots are especially valued by local population and can be easily sold in Saighan’s bazaar.

In addition, the prevention of flash floods and erosion through training and awareness sessions with CPC members has been useful for him and for the other inhabitants. “The protection of the vegetable coverage and bushes in the mountains is essential for animal grazing… The plantation of rain-fed alfalfa seeds prevents floods and early erosion”.

The long term impact of these activities is discussed and decided in cooperation with local communities as soon as possible. The objective is to raise populations’ awareness about and fight the degradation of natural resources and their livelihoods.