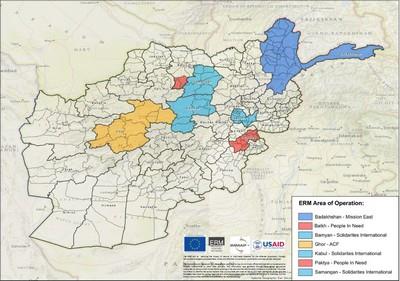 WHO WORKS UNDER THE EMERGENCY RESPONSE MECHANISM?

The Emergency Response Mechanism (ERM) programme is implemented by a consortium of five International NGOs – Action contre la Faim, Medair, Mission East, People in Need and SOLIDARITÉS INTERNATIONAL. All five partners adhere to the humanitarian principles of humanity, neutrality, impartiality, independence and transparency by providing aid to the most vulnerable people based on needs alone to save life and/or alleviate suffering, and without taking side.

The ERM was launched in 2011 and is nearing the end of its second phase. Now looking forward to a third phase, the consortium works in eight provinces throughout Afghanistan: Badakhshan, South Balkh, Bamyan, Daykundi, Ghor, Kabul (excluding Kabul City), Paktia and Samangan. Other areas of operation can be considered in case of disaster and need of an emergency response.

WHAT DOES THE EMERGENCY RESPONSE MECHANISM DO? 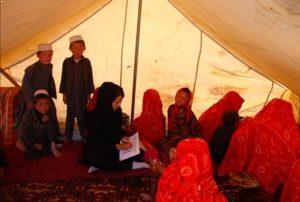 The ERM aims to provide a rapid response to the immediate needs of populations affected by natural and man-made disasters such as flooding, earthquakes, landslides and conflict-induced displacement. When the consortium receives a disaster alert, the partner in the corresponding province conducts a rapid multi-sectorial assessment to identify the needs of affected communities. Assessment findings are shared with the humanitarian community, the Afghanistan National Disaster Management Authority (ANDMA) and other local authorities to ensure that, as far as possible, all needs are covered. The ERM always intervenes according to the needs identified.

The ERM also seeks to increase communities’ capacity to withstand the hazards they face through a community-based disaster risk reduction approach.

WHAT KIND OF NEEDS DOES THE EMERGENCY RESPONSE MECHANISM ADDRESS? 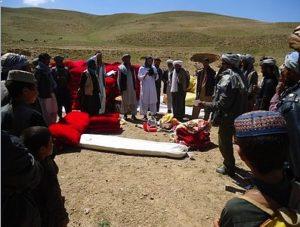 The ERM’s response to a disaster is defined according to the needs identified and may cover the following sectors: Non-Food Items (NFI); Emergency Shelter; Emergency Water, Sanitation and Hygiene and Food Security. When these needs go beyond the ERM’s mandate, the consortium coordinates with relevant actors to ensure that they are covered.

Within the communities which are most vulnerable to natural disasters, the ERM is also developing some small-scale Disaster Risk Reduction initiatives. These activities aim to increase communities’ knowledge of how to prepare for natural disasters and mitigate and/or reduce their impact.

As the ERM 2nd phase is almost finished, some activities are still ongoing, but so far the ERM consortium has already reached 27,166 beneficiaries. Assistance was provided both to displaced persons and people affected by flood, flash flood, heavy snow, or landslides.

In particular, this year SOLIDARITES INTERNATIONAL intervened in Bamyan and Samangan provinces by distributing 1,422 NFI (essential commodities) and community kits to people affected by flash flood and heavy storm, and by implementing disaster risk reduction and mitigation infrastructure that benefit to 5,978 persons.